A couple of weeks ago, one of our young goats, Poplin, (This is her a long time ago, when she and Boo were both much smaller!) suddenly became very ill.

She had what we believe was Meningitis. I didn’t take photographs, or write about it – because the outcome was almost certainly going to be grim. Boo, whose special goat she is, cried. We decided it was time to put Poplin out of her misery. She was only semi conscious, had no movement, we had to move her legs for her gently, each day, to preserve any muscle tone at all. She had fallen early on in her illness, and bumped her eye, which was closed and scabbed over. It was dire, and terrible and sad.

We prayed and prayed for wisdom for us, and mercy for little Poppy.

The girls and I tempted her with mouthfuls of banana, banana pennies, broken in three. Mere morsels of banana. We syringed water into her mouth.

Our lovely organic/homeopathic landlord came to the rescue with imported (from Australia) high dose vitamin C. We rang the country’s top goat vet. Poppy moved. We bought high dose Vitamin B1 and mashed it into Bananas. We gave her physio. One day she ate a banana. Whole. (they don’t normally like the mushy bit in the middle, they prefer the lovely chewy wrapper!) Neil developed a fierce determination to pull her through.She began to eat hay, then to drink water from a bucket.

Finally she decided to eat goat food from a bucket, and she stood up!  We did think though, that she would always be blind. Then yesterday, finally happy that she was out of danger, I went to take her photo. 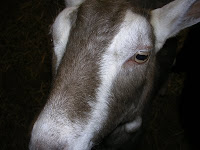 This is her sister, Paisley. And this is what normally happens when you try to take a picture of a goat. They try to eat the camera.

As you approach Poplin, she puts her head on one side, is she just listening to your footfall? I stood outside of her little protective pen, to take the picture. 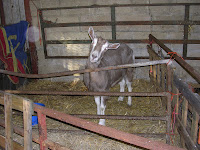 But no. Poplin definitely wants to eat the camera – so we’re sure she can see something, even if it’s limited! What a wonderful answer to prayer! What a brave and courageous goat! Well done Poppy! We love you! 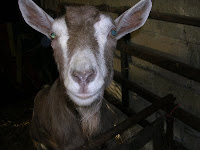 This is a post I wrote almost two years ago.

Poplin almost definitely had meningitis – certainly our vet diagnosed it, and the expert we spoke to agreed – we don’t know how she got it, but it could have been related to an injury she had to a regrown stump of horn – she was totally immobile, and she was definitely blind.

Undoubtedly, the mega vitamin C began the good work, but equally it was the B1 which really seemed to do the trick.  It wasn’t possible to get hold of it as an animal supplement, and we had nothing to lose, so we bought the human kind, and crushed it into the mouthfuls of banana which was all she could eat.

We gave Poppy physio every day – gently circling each limb, rubbing her back and tummy, manouevering all her joints so that they didn’t seize completely – even though she was absolutely immobile and not really responding. We prayed for her, and for wisdom to make the right decisions.

Three months later, Poplin was as right as rain, and didn’t feel like being left out when the stud goat came to play, and in July of 2009 ….

Poplin gave birth to twin girls, one of whom sadly was very small and weak, and whom we lost a few days later.

Lace is very much still with us and is with her cousin, Linen, head high on a thistle clearing mission as we speak.

We do not separate our babies from their mamas as other goat breeders do, but ‘share’ the milk production with the kids, with the result that our goats tend to have higher yields, happier lives and greater characters!

Poplin is now in full milk and the best of health, her eyesight is completely restored, and she is a joy to handle. Lacey is her mother all over, and is also in good health, with no problems. To this day, Poppy  responds strongly to the voices which brought her back from close to death.

Goat Breeds – Which One Do I Choose?

CARING FOR YOUR FARM FAMILY DURING EXTREME WEATHER – WINTER